It’s impossible for those of us who were not there to ever truly understand what it was like to live through the height of the HIV/AIDS epidemic, and for those who did, impossible to fully explain. As more people began to succumb to the illness, bureaucracy, greed and apathy held firm, presented challenges on all fronts.

The government was slow to respond, with the Reagan administration alternately joking about and ignoring the rising death toll. Pharmaceutical companies continued to price drugs out of the reach of most people who needed them. The FDA’s year’s long approval process resulted in a lack of access to potentially life saving medications. The media continued to publish false and misleading information. Many religious groups pointed to the deaths as proof of the sin of homosexuality.

In response, the AIDS Coalition to Unleash Power (ACT UP) was formed as a political action group in 1987. The fight against AIDS remains an ongoing struggle that the group remains active in today around the world, although not to the degree that it was during the height of the crisis.

Their bold, decisive actions helped bring about real change, such as more funding for research, lower drug prices, speeding up the FDA approval process and ending discriminatory practices at hospitals.

The Trump administration has so far moved most aggressively against the immigrant and refugee communities, and has taken some actions that clearly show they are not on the side of the LGBTQ community. The DOJ has stepped back from protecting transgender students, the White House website is noticeably absent from pages about LGBTQ rights and the CDC cancelled a planned LGBTQ youth summit over concerns that it might upset the new administration. There are also concerns that Trump may be looking to shut down the White House Office of National AIDS Policy (ONAP).

Meanwhile, concerns abound over a leaked “religious freedom” executive order that would provide a license to discriminate against the LGBTQ community. Even if it never comes to pass, a similar piece of legislation, the First Amendment Defense Act, could soon be introduced to Congress. Trump has said he would sign it.

We can learn from the successes of ACT UP and apply them to the fight against the regressive policies of President Trump and his anti-LGBTQ Cabinet. In fact, the process is already underway, as many ACT UP members are now meeting to stop Trump. ACT UP organized a protest during the campaign at Trump Tower over his attempts to use the massacre at Pulse nightclub in Orlando to “polarize Americans.”

It wasn’t the first time, either. On Halloween 1989, ACT UP protested against him in front of Trump Tower in an action that saw around 100 costumed people take part, and that was organized by the group’s Housing Committee. It was in response to a lack of housing for homeless people with HIV/AIDS as well as corporate greed generally.

Here are four easy lessons you can learn from ACT UP’s history that will help you fight back against the Trump administration today.

Know Your Message and Make It Clear 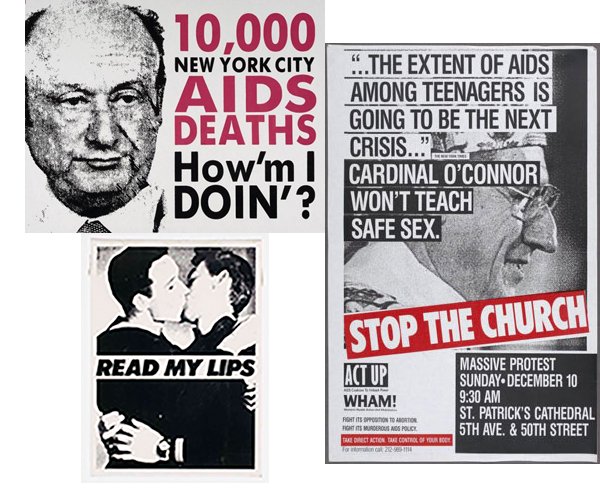 From the beginning, ACT UP realized they had to become as knowledgeable as those they were going up against, if not more so. They researched the issues thoroughly, built and maintained impressive networks of experts, and had their talking points down solid. It was impossible to deny that the activists knew what they were talking about and once they had the ear of the establishment and the authorities to whom they were appealing, they were able to not only articulate the problems facing them but also offer concrete and actionable solutions.

They also understood the importance of boiling down their message to memorable slogans and chants, such as “Silence Equals Death” and “ACT Up, Fight Back, Fight AIDS!” That, mixed with their theatrical demonstrations, made for perfect sound bites and video clips that were made for TV and allowed the messages to spread far and wide. 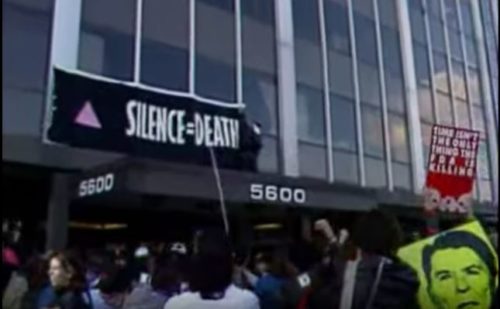 ACT UP protest at the FDA.

ACT UP displayed bravery by going big early and often. Some of their most notable actions include shutting down the New York Stock Exchange for the first time, in 1989, interrupting then governor Mario Cuomo’s State of the Union Address in Albany, in 1990, and disrupting the CBS Evening News live broadcast, in 1991, to name but a few.

Their righteous audacity got the attention of the press, and thereby the wider public, without their even having to resort to property damage.

While riots have had their place in the history of the LGBTQ rights struggle, such as at Compton Cafeteria and Stonewall riots, it is often felt that those actions can be used to disparage and dismiss a movement. Trump’s response to violent protests during his inauguration and at UC Berkeley, in response to a speech to be delivered by Milo Yiannopoulous, give some credence to this concern. 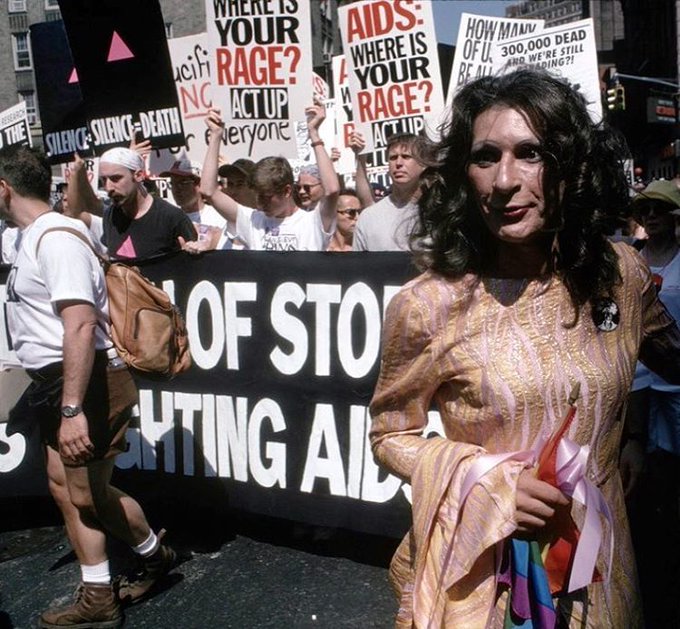 The group was organized as a leaderless, direct democracy, with working committees reporting to coordinating committees. While leaders did emerge over time, they often changed and everyone’s voice was valued. Not only did this make it harder to attack and dismantle the group, it meant everyone was able to find a place that best suited their abilities and interests.

This form of organization can also help to ensure that the least powerful voices are heard, although that is certainly no guarantee. Those most used to speaking and being heard should check that privilege and center the voices of the transgender and people of color communities.

Remain Focused and Check Your Ego 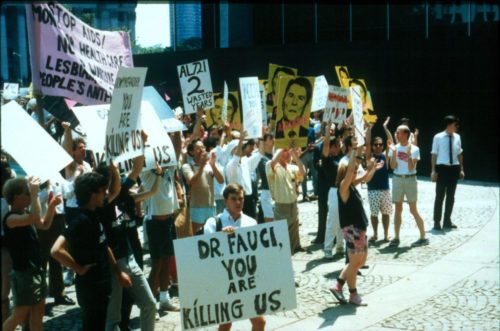 May 1990 ACT UP protest at the National Institute of Health.

In order to make a big enough statement to bring about real results, numbers are needed. Disagreements and egos can get in the way of the larger picture and can halt the progress of any movement in its tracks. While ACT UP remains an active organization, disputes over the group’s direction took much of the wind from its sails around the late ’90s. The Trump administration provides enough of a fight all on its own, as did and does the HIV/AIDS epidemic. Adding infighting into the equation is a surefire recipe for failure. Remember that we are all in this together.

Do not let this administration divide us. Let it unite us in resistance and still, somehow, in hope.